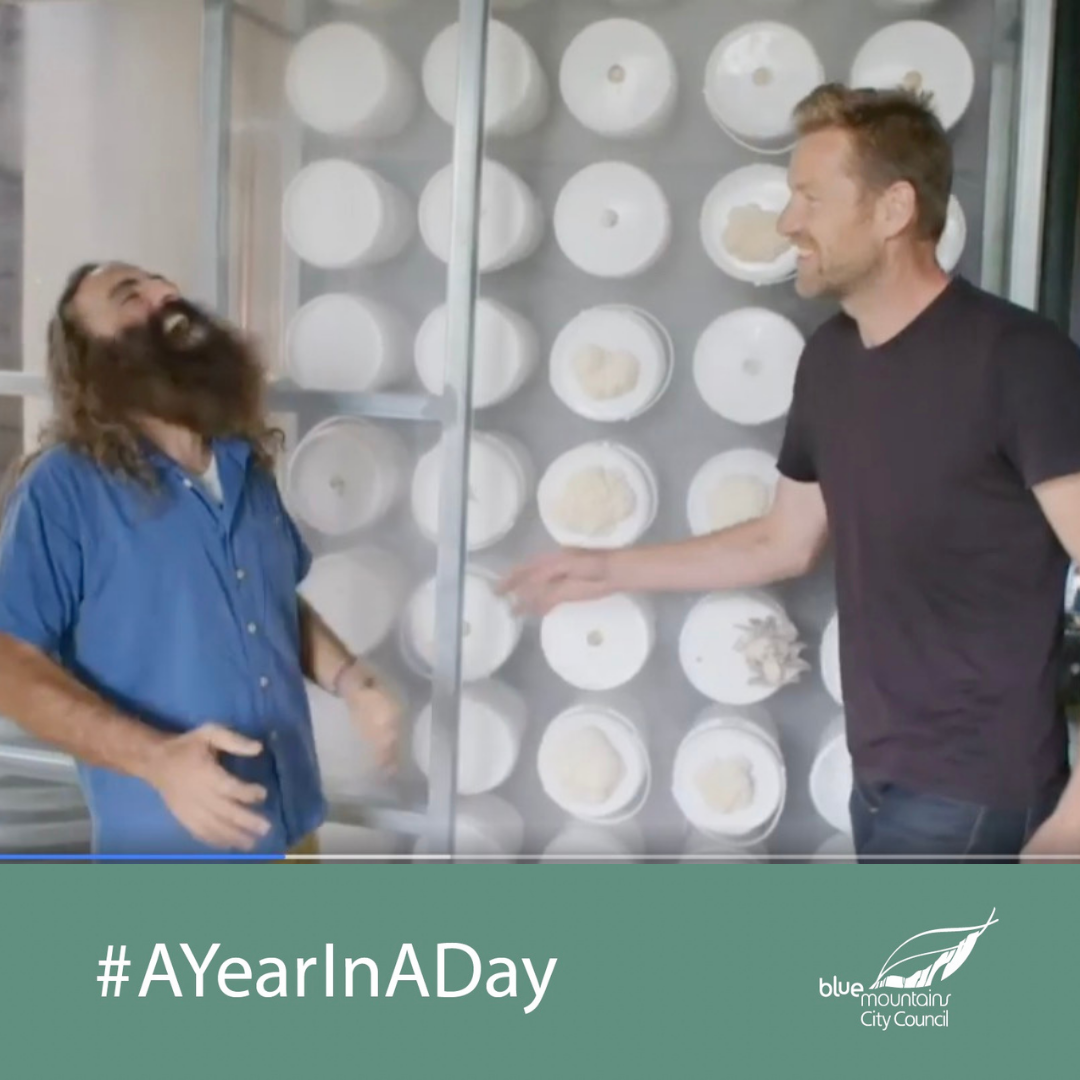 I was soooo inspired when I first saw the ‘mush-room’ in Joost Bakker’s Greenhouse at Federation Square in Melbourne. You can view it on Gardening Australia.

“Every house should have a bedroom, a bathroom and a mush-room!”

Bakker describes it as being part of an ecosystem that mimics nature to design waste out of our lives and create a Future Food System that could help us quickly transition to a completely sustainable system. I’d like to create something similar as part of a demonstration site for the Planetary Health Initiative so two weeks ago I took the plunge and began experimenting with growing oyster mushrooms. I’m learning as I go, and will probably fail forward, but my first tub looks as though the fungi have colonised the recycled paper I’m growing them on very well: 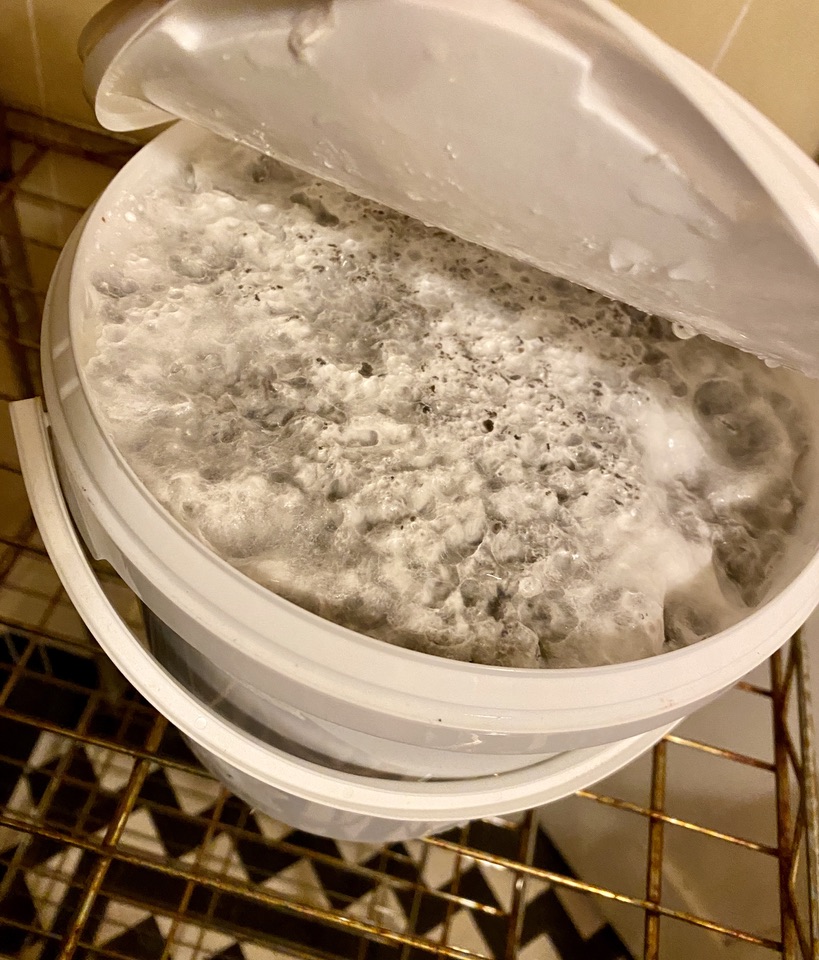 So today, for my #ayearinaday action, I set up a version of a ‘mush-room’ in a corner of the bathroom. Step one in making the dream a reality!

I took the surgical tape off the holes we drilled two weeks ago. They’ve been given a spray of water (which they’ll need twice a day) and now I’ll just wait and see if oyster mushrooms will emerge. 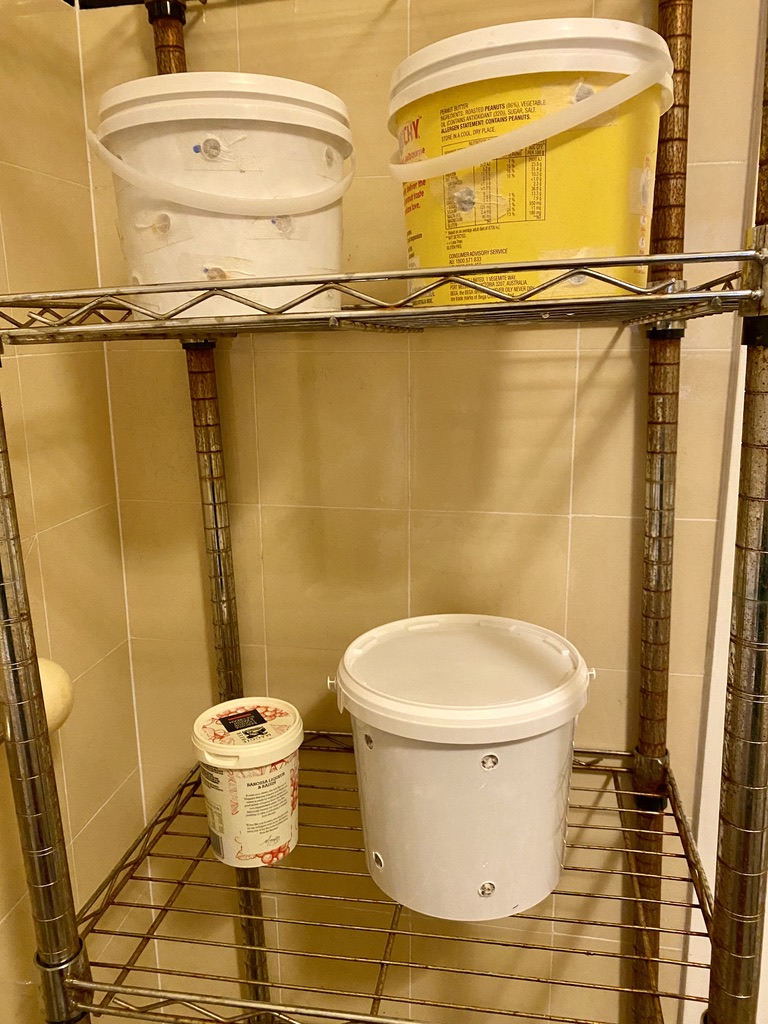 What other people are doing for A Year in a Day today:

Debra signed the Declaration to the The Convention on Biological Diversity and is trying out a recipe for making body scrub: Simply mix ½ cup aloe with just enough brown sugar, oatmeal (if you need extra moisture), or Himalayan salt to create a gritty texture. Then, rub it on your elbows, heels, arms, or wherever else needs softening in the shower.

Carla has been focused on publishing a book written by a writers group she set up and ran in Smithton in Tas. Her son donated the cover artwork and proceeds go to Smithton Community Garden. She’s been self-publishing on Amazon since 2015 and whatever else Amazon does badly, she says she’ll always love them for disrupting the publishing industry by setting up Kindle Direct Publishing! KDP and other self-pub platforms sell ebooks and print on demand paper books. She’s been wanting more exposure in Australia, and talking to other online booksellers, like Booktopia, they sell books from Kobo. So this week she’s been investigating Kobo Writing Life, the Kobo self-publishing platform. Meanwhile, any proceeds from “We’ll Save You!” which is a kids book about pirates and grandmothers, go to Smithton Community Garden.

It’s so inspiring to hear what other people are doing, and we’re gearing up to see if we can actually reach 365 actions in one day for World Health Day on Thursday 7 April. If you haven’t contributed an action yet, why not consider joining us for a WORLD FIRST on the 7th? Email planetaryhealth(at)bmcc.nsw.gov.au to let us know your action in advance.

Is it worth taking action?
Research by academics at Leeds University, engineering firm Arup and the C40 Cities climate group has identified that 73 per cent of all changes needed by 2030 to keep the world on course to meet the Paris agreement targets need to be made by governments and industry.
But private citizens have considerable influence over the remaining 27 per cent.