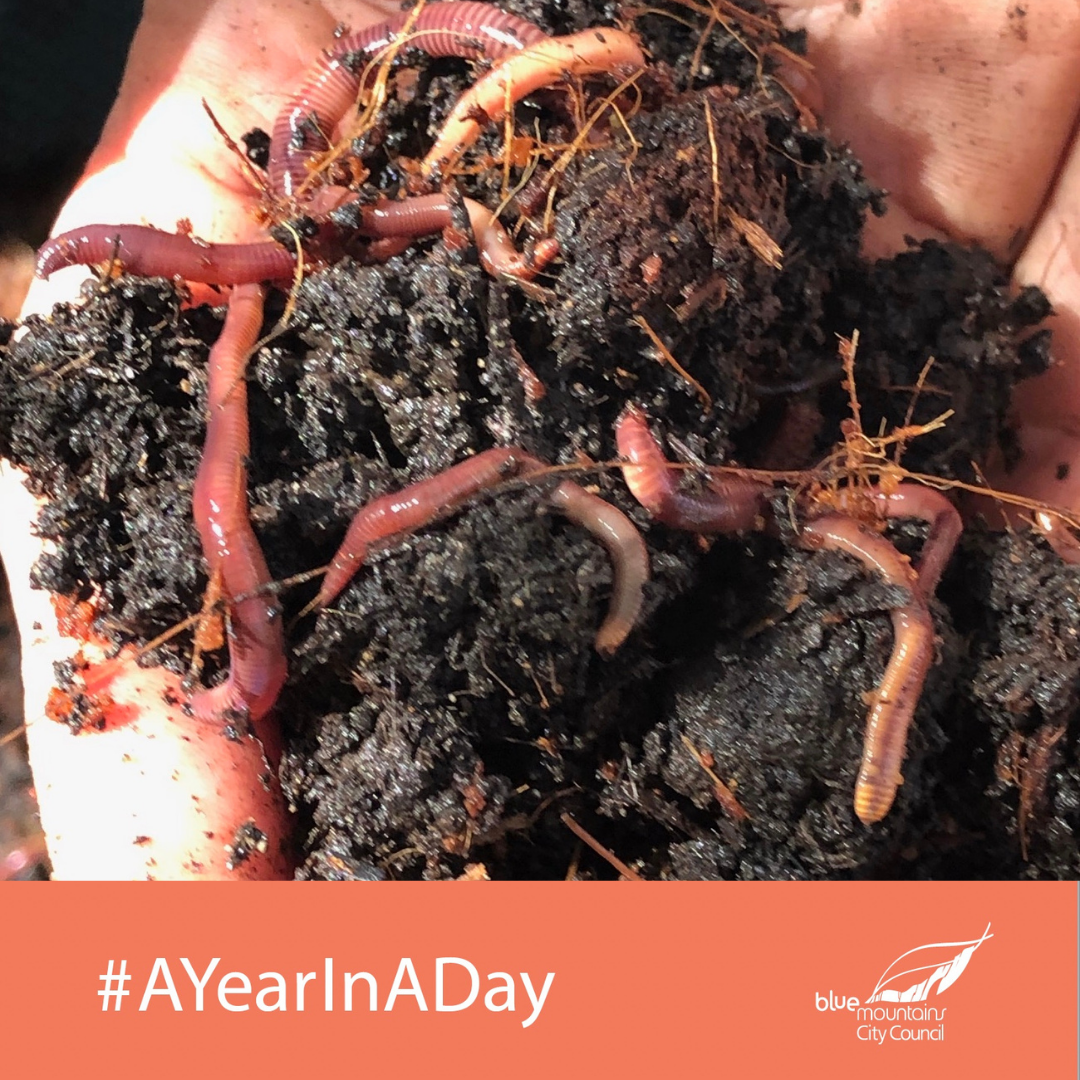 I was up for hours last night researching how to manage dog poo, so that I could reduce its environmental damage and the risk it poses to human health … as well as the health of many other species.

For today’s NEW action for #AYearInADay I decided to go one step further than I did yesterday and turn my new underground Dog Poo Compost bin into a Worm Farm.

During my research I discovered that there are an increasing number of trials around the world using dog poo in anaerobic biodigesters. They capture the climate-dangerous methane given off by the poo and convert it to biogas. While I’m not in a position to try that yet, today I’ve begun thinking about it and how it could be used in the Blue Mountains.

Way back in 2013, Kevin McLeod reported on an example in North Wales in this video:

“Dogs can harbor lots of viruses, bacteria and parasites — including harmful pathogens like e coli, giardia and salmonella. (A single gram contains an estimated 23 million bacteria.) Studies have traced 20 to 30 percent of the bacteria in water samples from urban watersheds to dog waste. Just two to three days of waste from 100 dogs can contribute enough bacteria, nitrogen and phosphorous to close 20 miles of a bay-watershed to swimming and shellfishing, according to the U.S. Environmental Protection Agency. It also can get into the air we breathe: a recent study of air samples in Cleveland, Ohio, and Detroit, Mich., found that 10 to 50 percent of the bacteria came from dog poop.”

According to an article in The Guardian:

“Animal Medicine Australia estimates there are 5.1m dogs in Australia. A single dog produces approximately 340 grams of waste per day. That means Australia’s dogs drop a mind-boggling weight in poo, 1734 tonnes – equivalent to nine empty jumbo jets every day, or a Sydney Harbour Bridge’s worth monthly.”

I want to make sure that nothing harmful leaches out of the dog composting I’m setting up, and I also want to find a way of processing the bins of dog poo in my yard that haven’t broken down after 3 years!

There are some basic no-nos:

I’ve decided to replicate what nature does, as closely as possible, by adding a worm farm to the underground compost bin I dug in yesterday. I won’t be using the castings on my vegetable garden, but expect to use them under mulch around some ornamental trees.

First I soaked a block of coir in water. When it had turned to mush I placed it on the bottom of the bin, onto the soil, to create ‘bedding’ for the worms.

I then added a few handfuls of worms from our worm farm, some coffee grounds and the newspaper and poo from the bucket I took on our walk (instead of using plastic dog poo bags). I’m keeping everything crossed that this will work.

It’s better for my worms than the small plastic worm farm they were in. The temperature underground will never get as hot or as cold as that worm farm container.

I also sprinkled my three-year-old FULL BIG MISTAKE poo bin with lime, watered it in and added a few composting worms. I’ll check in every day and see if there’s any progress.

This new dog poo worm farm is next to our concrete driveway ( so leachate can’t travel) and a place I frequently come to for our community compost hub. Fingers crossed!

We’d love you to collaborate with us and share any NEW action you take to restore planetary health in the comments below or on our social media. Let us know if other people are influenced by your posts, or ours, so that we can measure outcomes of this project. The first time you leave a comment on this blog you’ll need to enter your name and email address.

Well, I feel more determined than ever to not get a dog! So much to consider to be a responsible dog owner!

In an attempt to keep us all healthy and reduce pressure on the healthcare system, I’ve been exploring different ways to boost our immunity. For day 22 I made fire cider for the first time! This is a potent brew of horseradish (I swapped another local gardener some duck eggs for her lovely horseradish roots), ginger, garlic, onion, turmeric, rosemary, chilli, lemon and apple cider vinegar. It’ll be steeping for a month before it’s ready to mix with some honey and use to keep our immune systems strong and also to boost our systems if we get sick. I’ll let you know how it turns out!

Oh yum that fire cider sounds amazing … if it works I’ll have to get the recipe off you!

Quiet day. Not ,much energy from the roof or gardening. Been Reading about bird lead bush regeneration and thinking about “garden link”. Gardens for food, bio-regeneration and community. So like farm it froward, but with bio-regen (and basic maintenance) as well ! People would pay a subscription, and chip in on volunteer days.