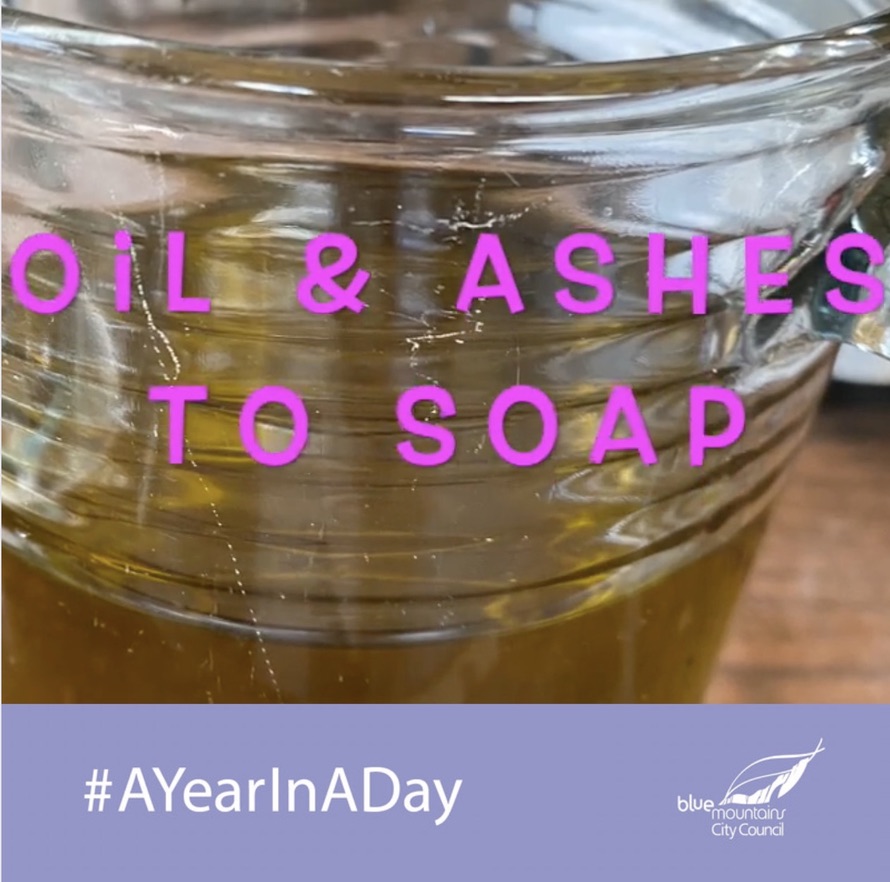 It’s been such a cold wet week that we’ve resorted to hot chips and log fires. That’s meant, however, a big jar of used olive oil that I couldn’t bear to just throw out.

I’ve always wanted to have a go at making soap from used oil, so the impetus of A Year in a Day motivated me to give it a shot. I didn’t want to buy lye, or caustic soda, because the point was to use up what we had, not buy anything more. So I did a bit of googling and realised I could use the ash from our fire, and the rainwater that we have an abundance of at the moment, to make our own lye.

Campers often add ashes from their fire to their greasy frypan after a meal to clean it out … oil and ashes make a rudimentary soap. I figured it’s not rocket science so I may as well try. Nothing to lose but time – and that’s never lost anyway if you’re learning something. You can watch my attempt here

What I learnt that the instructions didn’t tell me:

The most interesting aspect of this experience was stirring a boiling pot of ash that felt like a witch’s cauldron. It made me think about bubbling volcanoes, chemical reactions and the basic processes of life I know so little about. It felt good to actually discover, in a very hands-on way, what soap actually is and how it’s possible to make it so easily.

It also felt really good to get another use out of our oil, our ash and our long life container.

Waste and Recycling Workshops and Events

If you’d like to explore more ways to transform waste into a resource, Blue Mountains City Council has just announced its free online workshop dates for February and March. You can book here

We’d love you to collaborate with us and share any actions you take to restore planetary health in the comments below or on our social media. While we’d love you to share any action you take to inspire others, we’ll be recording NEW actions that people take as part of our tally, because we’re trying to inspire one another to do more than we’re already doing. Feel free to copy some of the actions our participants have been sharing – the action only needs to be NEW for you. Let us know if other people are influenced by your posts, or ours, so that we can measure outcomes of this project. To leave a comment on this blog you’ll need to enter your name and email address.

Categories: A Year in a Day
Tags: make your own lyesoap makingturned used oil oil into soapzero waste