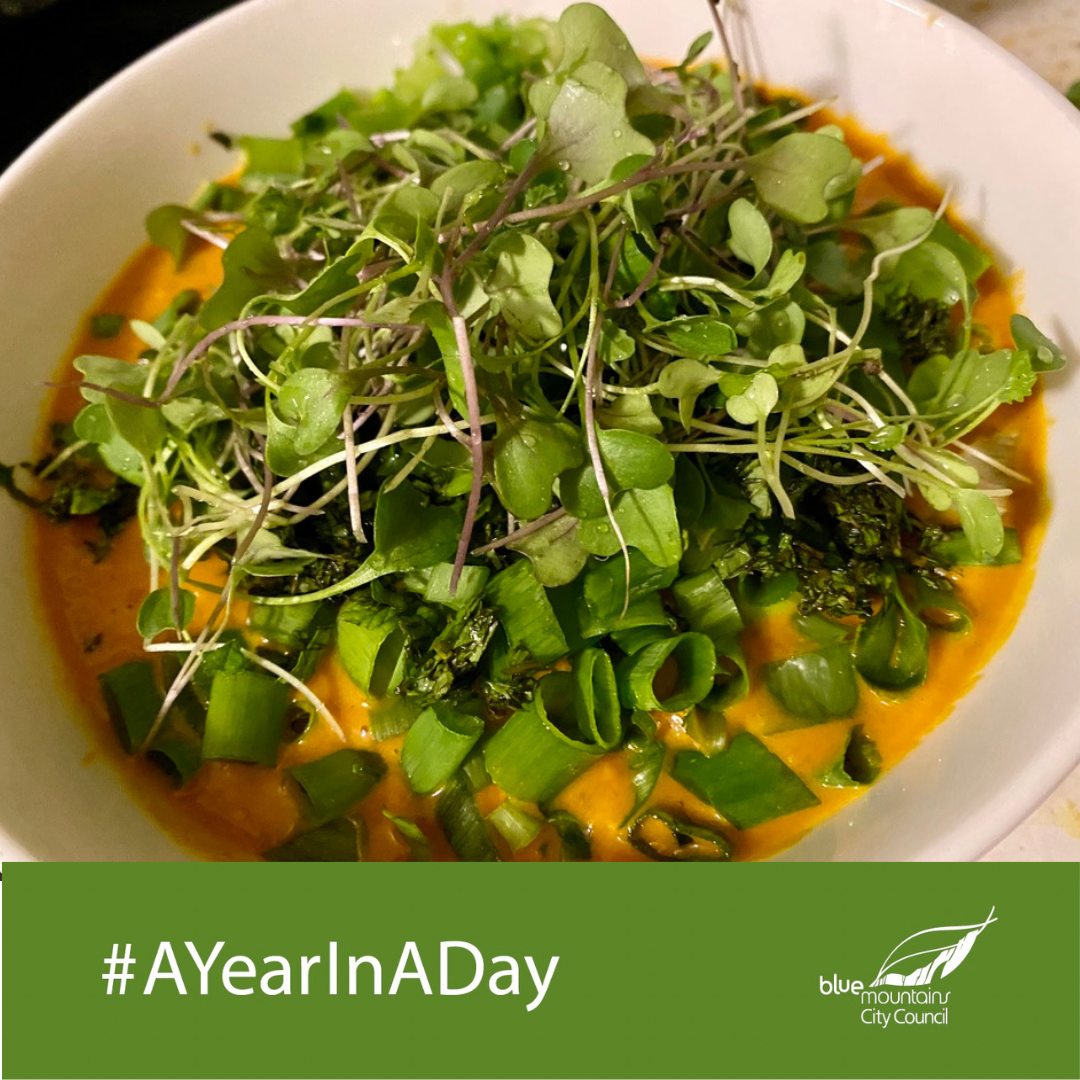 Just under two weeks ago I made my first attempt at growing microgreens. I’ve been so impressed at how quickly we got a crop. Today we harvested the last of them and used them on our Laksa for dinner.

Researchers have found that the leaves of microgreens have four to six times more nutrients than the mature leaves of the same plant. So, while they might not be filling, they’re delicious and very nutritious.

Today I experimented with pulling them out and washing the dirt off their tiny roots instead of cutting them off. It was fiddly but meant that none of the plant was wasted. I can’t imagine anyone doing that in a restaurant, but for the small amount we were processing it felt worth the effort.

My new action for today was to work out what to do with the soil after harvesting them.

One of the reasons I started on microgreens was that I had so many seeds that I hadn’t been able to identify. I knew they were mostly brassicas, but lost track of which ones. Because brassicas take so long to grow, I wanted to be sure I knew what I was planting.

Today the true leaves were emerging on the microgreens and I could suddenly identify them. I decided to pot up one of the black kales I identified to see if I could grow it to maturity. If this works, I may merge growing microgreens and seedlings for on-planting in the future. It will mean a staggered ongoing harvest of nutrient rich greens.

I’d also left in a few of the sunflower microgreens to experiment with and they’d really taken off, so I decided to pot them up too.

From my reading, I understand the dilemma of reusing microgreen soil or growing mats with too many further batches of microgreens because of potential mould. I decided that the harvested microgreen roots had added valuable organic matter to the soil, so why not re-use it to grow bigger plants.

I used up all the soil and now have a tray of pots in the greenhouse – interestingly, with exactly the same footprint. Sunflower seedlings wouldn’t survive in my yard at the moment because it’s so cold, wet and teeming with snails and slugs. Hopefully they’ll thrive in pots in the greenhouse and in another two weeks we might have enough sunshine to plant them out and grow them to maturity. I’m looking forward to harvesting my next batch of seeds for microgreens.

We’d love you to collaborate with us and share any actions you take to restore planetary health in the comments below or on our social media. While any action you take is valuable to inspire others, we’ll be recording NEW actions that people take as part of our tally, because we’re trying to inspire one another to do more than we’re already doing. Feel free to copy some of the actions our participants have been sharing – the action only needs to be NEW for you. Let us know if other people are influenced by your posts, or ours, so that we can measure outcomes of this project. To leave a comment on this blog you’ll need to enter your name and email address.