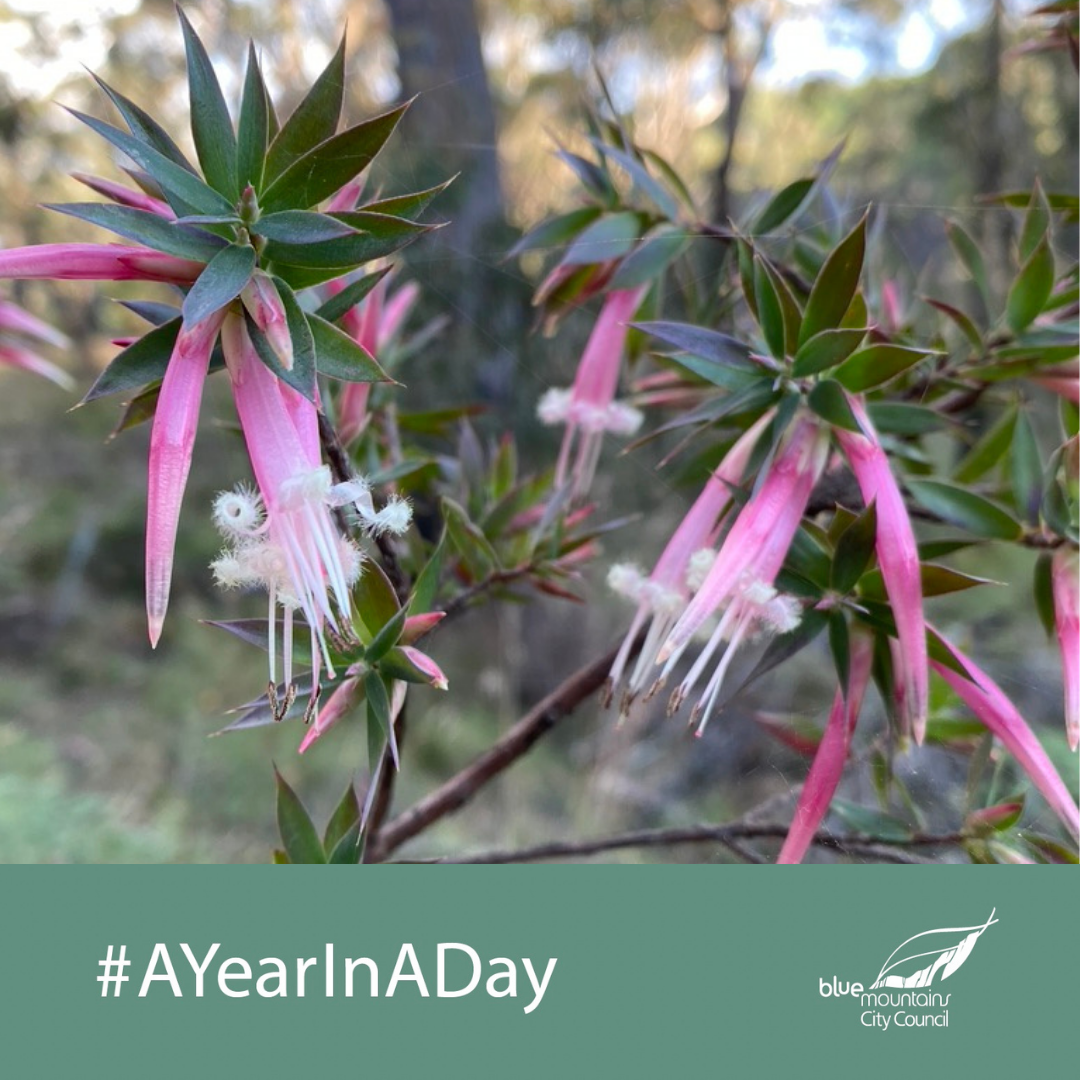 We give names to those we love. Names matter. The names we give our children, the nicknames we give our friends and lovers, and the names we give our companion animals. In 2016, as my husband and I began to fall in love with the native plants on our daily walk, we gave our first plant a nickname. We struggle to remember botanical names, but we’ve never forgotten our ‘pink party frock’.

This week our ‘pink party frock’, was flowering again – but a month later than it did in 2016. It’s been a cold wet year.

Naming those we love can also increase our attachment to them. We now feel so attached to this flower that we also feel an overwhelming desire to protect it. Today, for the first time, I made sure that I took a photo and uploaded it to iNaturalist, so that it’s recorded as flowering on Ridgewell Rd, Blackheath. I’m hoping that the more people that know it exists, and where it can be found, the more chance there is of others wanting to protect it too.

Even though I struggle to remember them, I do really love botanical names too. And I particularly love reading about the people that first fell in love with these plants and gave them the name by which they’re now globally recognised.

Our ‘pink party frock’ was named Styphelia triflora by English botanist, botanical artist and engraver Henry Cranke Andrews in 1799. Andrews also reportedly named the Australian flowering plant Correa after the Portuguese botanist and polymath, José Francisco Correia da Serra, who was living in exile in England from 1795 to 1797, and who pursued research with their mutual colleague Joseph Banks

Thanks to Facebook I have a record of when I first researched this beautiful plant’s name, and gave it it’s nickname in 2016:

Some common plant names are completely inadequate. Today this gorgeous pink flower made a showy entrance in our pocket of bush. I’m fairly certain it’s a Styphelia triflora. The Greek word Styphelia means dense, and refers to its compact habit. Triflora is made up of the Latin tri, meaning three, and florus, meaning flower. Looking at this riot of pink I’m quite comfortable that the name Styphelia triflora does do it justice. But its common name …. Pink Five-Corners! REALLY????? Did anyone ever come up with a common name so disconnected from the beauty it was naming? I can’t bring myself to call it something that sounds like an origami pattern. Henceforth I call this Styphelia triflora the Pink Party Frock! It made my day by its arrival and I’m even looking forward to seeing its fruit further down the track. Apparently it produces green-brown fruit the size of a small grape. They’ve been described as the best berries of the bush.

The inspirational Marion Jarratt speaking about why names matter

The most inspirational person I’ve ever heard talking about plant names was Marion Jarratt, Chair of the Friends of the Burrendong Arboretum in Wellington. The Arboretum is an attempt to return a dry sheep paddock into what the landscape may have been when dinosaurs roamed. And it all comes down to canopy … if we can increase canopy we can modify microclimates. And if we fall in love with plants and their names, and want to protect them, we can all help stop species extinction. You can listen to my interview with Marion in 2010 here:

Today, as my new action, I decided to get more serious about leaving a record of the beautiful plants I love, their names, and my observations of both climate and human impacts on them. I don’t want to trust Facebook to keep that record so I started putting together a small booklet for my family and friends.